I work in a pretty rural area. How rural, you ask? So rural that there’s a house down the street from my office that has chickens freely roaming in the yard. There’s no fence to keep these animals confined. If they became fed up with their owners, they could totally pack up their chicken suitcases, put on their chicken fedoras, and head on down the chicken road.

But these chickens are either totally happy with their circumstances, or perhaps just not smart enough to escape, because they’re still there.

Sometimes, when my coworker or I get a little frazzled at work, we like to take a short walk around the neighborhood to clear our heads. We’ve observed the chickens in their yard – pecking at the ground, staring blankly at each other, and occasionally perching on a windowsill of the house.

I know what you’re thinking – why would a person want to do this? And I don’t really have a clear answer for you, Judgey McJudgerson. I just know that I want to do it. I imagine that’s the same answer you’d get from a dog if you asked him why he pees on fire hydrants.

Unfortunately, my boss has requested that my coworker and I keep our adventures on the legal side of life – which is a fair boundary. I guess. Before embarking on our chicken journey, I thought it’d be wise to interview a local police officer to determine whether this activity is lawful or not. However, the small shred of decency I have left made me too embarrassed to ask any actual police officers.

So, I’ve moved on to Plan B: I’ll just put myself in the shoes of a policeman. Not literally, because their shoes don’t look comfortable. Instead, I’ll  imagine how this conversation might have gone down, if it had actually happened.

Amanda: On a scale of 1-10, how illegal is it to chase another person’s chickens?

Amanda: I work in a rural area, and the house across the street from my office has chickens that just run around freely – no fence or anything! For some reason, my friend and I are overwhelmed with the desire to chase them, preferably while drunk.

Police: Wait, who’s drunk in this situation? The people or the chickens?

Amanda: The people, of course! We would never get CHICKENS drunk. We’re not monsters. Although, if we manage to catch a couple of them, we do have other plans for them. If you know what I mean.

Police: Oh God, are you going to cook them?

Amanda: Of course not. What’s wrong with you? We’re just going to use them to reenact The Lion King, only with chickens. We’re calling it The Chicken King. Clever, huh?

Police: So, ALL the animals will be chickens? Including the giraffes?

Amanda: No, no, only the lions will be played by chickens. The rest of the animals will play themselves.

Amanda: It’s okay, it’s a complicated concept. You see, Simba, Mufasa, and Scar will all be chickens. But Rafiki will still be a baboon, and wildebeasts will still be the assholes who trample Mufasa, who will be known in the movie as “Mufasa Chicken.”

Police: So now you’re bringing wildebeasts into this scenario?

Amanda: The wildebeasts will be implied, mostly because we don’t have access to any. Also, I don’t mean to make stereotypes here, but wildebeasts are a pretty uncooperative bunch.

Amanda: We’re not going to keep the chickens. I live in an apartment! Where the hell would I keep them? We’ll just film the movie and then leave.

Amanda: What if I said that the chickens’ owners could participate in the making of The Chicken King? They could play Poomba, or maybe Nala Chicken, if they really show promise.

Police: Yeah, I’m not sure that helps.

Amanda: Well, what if we offered them 50% of the proceeds from The Chicken King? You KNOW it’s going to be a hit.

Police: Wait a sec, the movie’s not even happening unless you manage to catch some chickens. What if you don’t catch any?

Amanda: Plan B is to just chase them until we get tired. Neither of us is an athlete, so that probably won’t take long.

Note: no chickens or police officers were harmed in the making of this really weird blog post. I truly do feel a strange affection toward chickens now, despite having never cared about that animal in the past. It makes me question my love of fried chicken and enchiladas.

Note #2: Just for kicks, I did an image search for “The Chicken King,” and this was the first result. Seems legit. 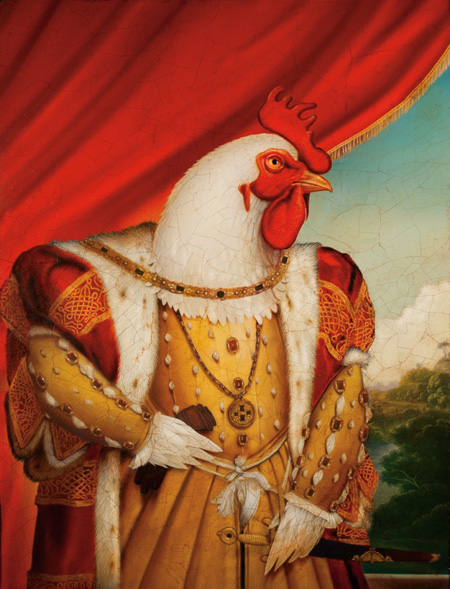